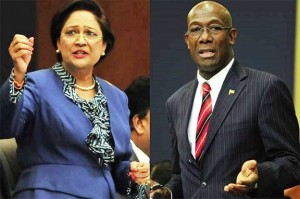 The leader of the Opposition repeats her call for the Prime Minister to engage her in a debate on the economy.

In a release yesterday and three days after she first made the call, Mrs. Kamla Persad Bissessar told the Prime Minister he owes it to the country to account for his goverment’s management of the economy.

She said Trinidad and Tobago remains besieged with a crime epidemic, loss of more than 50,000 jobs and negatives in every sector.

Referring to the Prime Minister Keith Rowley’s ‘Mind Your Business’ event, aired over two nights this week, Mrs. Persad Bissessar said the government has nothing to show for its three and a half years in office.

She said Dr. Rowley’s lecture was a feeble attempt to launch his party’s re-election campaign.

Mrs. Persad Bissessar reminded Dr. Rowley that he was elected to serve the people and said he must do so in the nation’s parliament.

She said she has filed in the parliament notice of a motion to debate the details of the “Mind Your Business” event.

Mrs. Persad Bissessar said the ball is in the court of the Prime Minister.