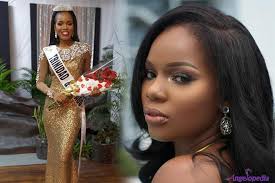 Yvonne Clarke is reinstated as this country’s Miss Universe representative.

This was confirmed by Ms. Clarke’s manager, Neil Young yesterday, two days after she was stripped of her title.

Speaking with us Mr. Young said Ms. Clarke is the delegate to represent Trinidad and Tobago at the Miss Universe competition.

On Tuesday, less than two weeks after she was crowned Ms. Trinidad and Tobago universe, 28-year-old Yvonne Clarke was stripped of the title.

The San Fernando delegate lost her title after a television news story on Monday evening.

The Ms. Universe franchise holder, Jenny Douglas, issued a statement on Monday advising that Ms. Clarke had been disqualified.

However, but in a media conference on Monday Ms. Clarke said she did not do anything without the authorization of the Miss Universe franchise holder, Jenny Douglas.

Ms. Clarke said she has e-mails to prove this.

She insisted she was professional throughout the entire process.

In a release yesterday the Miss Universe Trinidad and Tobago franchise said all issues concerning 28 year old Ms. Clarke have been settled.