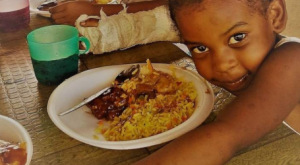 The woman held in connection with the death of 4 year old Jenice Figaro has been charged with murder. She is expected to appear before a San Fernando magistrate today.

Instructions to charge were given by the office of the Director of Public Prosecutions yesterday.

The woman was detained two weeks ago, gave a statement and was released pending further inquiries.

Little Jenice died on the night of November 24th, at the San Fernando general hospital. Police were told she fell ill after eating a meal of french fries prepared by a female relative.

The child’s father, Robert Figaro, left her in the care of the relative and when he returned home his daughter was in an unconscious state. Jenice was taken to hospital, but pronounced dead by doctors. An autopsy later discovered, she died from a beating to the head and abdomen.

Investigators believe the child was being abused for months. Jenice’s father said he was not aware that his daughter was being beaten.

The child had lived with Mr Figaro since she was ten months old and her mother, Shana Charles, said she wanted to keep her little girl, but she was unable to give her a good life.