Warnings of more earthquakes to come 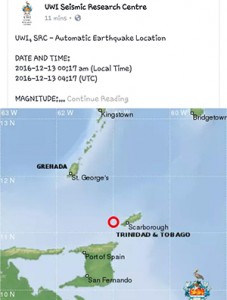 There are again warnings of more earthquakes to come in the future.

This follows another earthquake recorded off Tobago.

This comes less than 1 week after a 6.1 magnitude quake, which rocked the country, leaving a number of homes and other buildings with cracked walls and floors.

Dr. Robertson is predicting more earthquakes in the near future.

He said there have been over 400 aftershocks following the 6.1 quake of last week.

Works and Transport Minister Rohan Sinnanan, has confirmed there was no structural damage to state infrastructure due to last Tuesday’s quake.