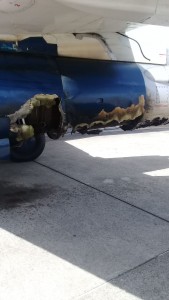 A Venezuelan aircraft was forced to make an emergency landing at Piarco International Airport after it developed engine problems, shortly after take off.

The airports authority yesterday confirmed that shortly after the departure of Venezolana Airlines, Flight AW1303, Air Traffic Control was contacted and told of engine failure.

The pilots requested and were granted permission to return.

They were told emergency response agencies were alerted and were on standby.

At 1:03pm the aircraft landed safely and there were no reports of injuries.

79 passengers were on board the plane.