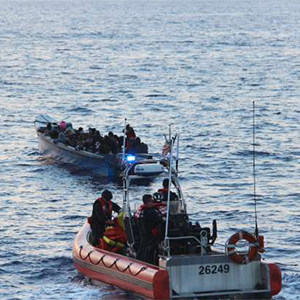 The Coast Guard in the U.S. has intercepted 50 Haitian migrants on an overloaded boat and has sent them back to the island.

The Coast Guard’s Robert Yered Crew spotted the 30-foot panga boat about 46 miles north of Cap-Haïtien, Haiti, one week ago.

The Coast Guard’s Smallboat Crew boarded the vessel and found 36 Haitian men and 14 Haitian women aboard the rickety boat.

Captain Jason Ryan of the Coast Guard 7th District says the bottom line is these voyages put lives at unnecessary risk and often involve ill-advised agreements with smugglers on poorly equipped, makeshift vessels which are prone to capsizing.

He says this humanitarian mission is a priority of the coast guard and its foreign and domestic partners.”

Captain Ryan says missions like this interdiction strengthen the coast guard’s “presence in the region” and stops “these illegal activities from occurring, putting safety at sea first.”

After the Robert Yered Crew removed the men and women from the boat, they sank it to prevent a hazard to navigation.

According to the coast guard, about 2,474 Haitian migrants have attempted to illegally enter the U.S. by sea since May 20th, compared to the same period in 2018 when 2,727 Haitian migrants tried a similar voyage.