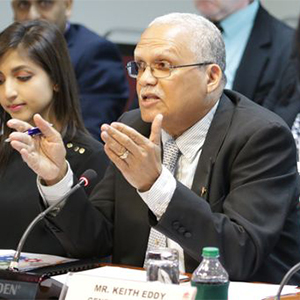 The meet­ing be­gan with Mr. Ford de­tail­ing a litany of woes faced by the board and dating back to the period of 2010 and 2015.

Mr. Ford explained that the au­di­tors re­signed just when the fi­nan­cial state­ment for 2015 was due.

Yesterday Mr. Ford was not pleased with how the meeting was being conducted and said he did not think it proper for him to stay.

On TV6’s Morning Edition earlier, Mr. Ford said auditor Anil Bridgelal refused to work with CEPEP’s audit committee but was now being given priority at the JSC.

Responding to the incident before him, Chairman Viera was disappointed.

According to records this is the first time a state enterprise’s chairman has walked out of a JSC meeting.