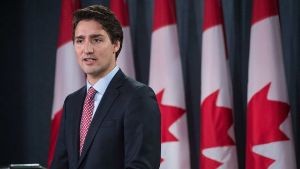 During the Cold War, hundreds of gay men and women were fired from their government jobs and the military.

The government has earmarked C$100m ($78m, £58m) to settle a class-action lawsuit filed by LGBT victims.

Mr Trudeau has also proposed a bill in parliament that would allow the courts to expunge the records of people criminalised for their sexuality.

“It is with shame and sorrow and deep regret for the things we have done that I stand here today and say: We were wrong. We apologise. I am sorry. We are sorry,” he said in the House of Commons on Tuesday.

Mr Trudeau’s words were greeted by a warm round of applause from all parties.

The prime minister also spoke out about past discrimination against gay marriage and gay works of art, which were often banned as “obscene”.

“While we may regard modern Canada as a forward-thinking and progressive nation, we cannot forget our past,” he said.

During the Cold War, the Canadian government and military regarded gay employees as more vulnerable to blackmail by Soviet agents. They were interrogated about their sex life and forced to inform on their friends.

Mr Trudeau called it “nothing short of a witch-hunt.”\