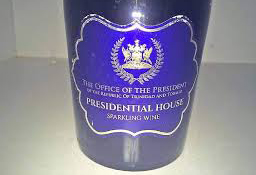 Still no clarification on how the National Emblem ended up on bottles of wine at President’s house but a Government Minister says official permission must be given before it is used.

Yesterday Minister in the office of the Attorney General Stuart Young responded to questions surrounding the appearance of the emblem on bottles of wine reportedly ordered by the Office of the President.

According to an Express Newspaper article the President’s house ordered 1 million dollars worth of sparkling wine over a 2-year period.

At yesterday’s Post Cabinet News Conference, Mr. Young was questioned on the use of the Coat of Arms on the wine label.

He said permission must be sought from the Minister of National Security.

However, he could not say if this was done.

Questions have also been raised about the procurement process, as well as whether President Anthony Carmona was aware of the purchase and the possibility of a breach of public procurement rules.

Again he could not say if this was done.

The Office of the President is yet to respond to the development.