Neil Bissessar to appear in court charged with sexual grooming 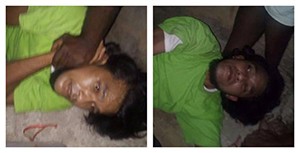 The man held during what has been called a sting operation led by the mother of an 11-year-old girl has appeared in court.

29-year-old Neil Bissessar has been charged with the offence of sexual grooming.

When he appeared in court yesterday Mr. Bissessar was denied bail in order to allow the police the chance to conduct a criminal background trace.

He has to return to court tomorrow.

Mr. Bissessar was represented by defense attorney Taradath Singh who said his client had suffered a broken middle finger and injuries to his spine and back during a beating he received from neighbours of the girl.

The offence was laid under the children’s act, and Mr. Bissessar was not called on to enter a plea.

It is alleged that Mr. Bissessar, on two occasions, sent several messages via telephone and social media to the 11-year-old girl

He is said to have told her to send pictures of herself and reportedly asked to come to her house.

Last Thursday Mr. Bissessar is reported to have gone to the girl’s house where he was confronted by her mother and a group of neighbours.

They subsequently beat him and tied him up until the police arrived.

His attorney asked the magistrate to consider granting Mr. Bissessar bail, as his client had no previous convictions and was a member of the Kingdom Hall of Jehovah’s witnesses for several years.

But magistrate O’Connor said Mr. Bissessar was charged under the children act 2012 and did not call upon him to plead.

She remanded him into custody pending tracing as confirmed by court prosecutor Sgt. Ken Ali, who said they were awaiting results.