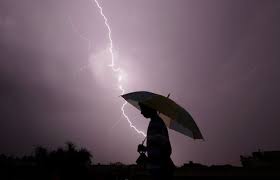 The number is unusually high and the result of “extreme weather patterns”, according to the state disaster management authority.

Nine people, including a nine-year-old girl, have been killed in the state by lightning strikes since Tuesday.

Lightning strikes are common in India during heavy monsoon rains.

The season typically begins in June and lasts until September.

Tuesday’s bout of lightning is being considered an anomaly because data from last year shows that there were some 30,000 lighting strikes throughout the entire month of May in the same region.