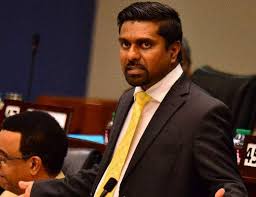 One Opposition Senator is calling for an investigation into what he describes as “roti” police stationed at a business place on the Solomon Hochoy Highway.

In the Senate yesterday Gerald Ramdeen said four police officers have been sitting outside the Highway Roti Shop near Freeport chasing people away.

Senator Ramdeen said the action of the officers is because of a personal vendetta a Deputy Commissioner of Police has with the owner of the shop.

Senator Ramdeen was speaking during debate on the Motor Vehicles and Road Traffic Amendment Bill, 2017.