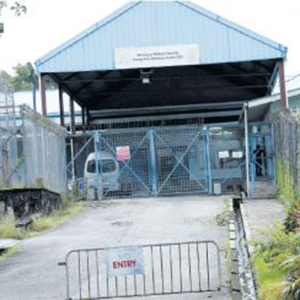 A riot at the Immigration Detention Centre in Arima.

It is reported two officers were taken hostage in a situation that erupted at the facility yesterday afternoon.

According to reports a group of detainees, which started agitating earlier this week, said they are being held in inhumane conditions and their continued detention is unlawful.

Riot police were called to the facility yesterday because of the flare up involving the more than 150 detainees.

Armed with rubber bullets and tear gas the police were prepared to use force.

It is reported the detainees blocked officers from entering the main area where the protest was taking place.

Some detainees say they were beaten by officers who eventually brought the situation under control.