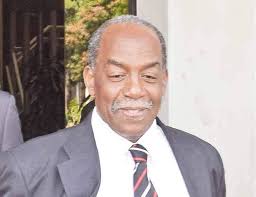 The Prison Commissioner Sterling Stewart is standing by his decision to allow a prisoner accused of murder to conduct financial transactions at a bank.

The matter was highlighted on the beyond the tape programme last week.

Prison Service later explained that on November 25th the inmate was granted approval to go to the First Citizen’s Bank in San Fernando to conduct a personal transaction.

Yesterday, before a Joint Select Committe of the Parliament, Commissioner Stewart said this was done after careful consideration and assessment.

He was questioned by chairman fitzgerald hinds.

Commissioner stewart was made to explain why prisoners are allowed to leave the jails.

Another committe member wayne sturge wanted to know why another inmate Jerome Henry was not given the same treatement, to allow his son’s funeral.

He questioned if preferential treatment was given because the other inmate was a prison officer.

He also said it was the third time that inmate was alowed to leave the prison.

In the end Commissioner Stewart stood by the decision and said if placed in the same situation he would do it again.

Commissioner Stewart is expected to sit before the JSC again.