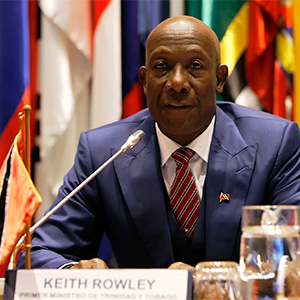 Prime Minister Dr Keith Rowley, along with some leaders of the region have held talks with United Nations Secretary General Antonio Guterres.

The meeting yesterday took place at the UN’s headquarters in New York and they discussed the ongoing crisis in Venezuela, which is just 7 miles away from Trinidad and Tobago.

The Office of the Prime Minister yesterday released a video of Dr. Rowley telling of the meeting and its outcome.

The Prime Minister said dialogue is the way forward to resolving the major issues in Venezuela.

The talks with the UN Secretary General followed a Caricom heads of government emergency meeting last Thursday where it was decided that the regional body should engage the global organisation.