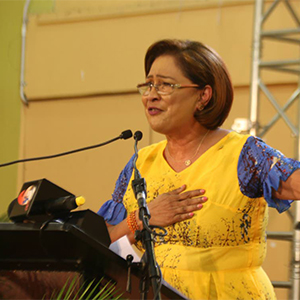 The Opposition Leader is claiming there are corrupt officials at the Elections and Boundaries Commission.

Mrs. Kamla Persad-Bissessar believes there could be a connection between reports of a Venezuelan national being in possession of a Trinidad and Tobago ID card, and EBC officials.

She was speaking at a political meeting in Moruga on Monday night.

On Sunday, Chief Elections Officer Vern Narciss Scope told Newscenter 5 there was no one registered with the name, Juan Navaro.

But Mrs. Persad-Bissessar is not satisfied with the explanation given.

Addressing the economic issues in the country, Mrs. Persad-Bissessar also slammed the government for its policies.

She said government’s priorities are topsy turvey and all the micro economic fundamentals are showing an economy in decline.