Newly appointed Commissioner of Police in Jamaica, George Quallo has vowed to defend members in the fight against crime 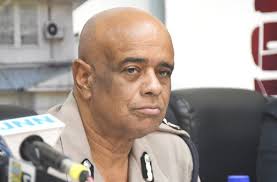 Jamaica’s newly installed Commissioner of Police; George Quallo has vowed to defend Members of the Constabulary Force in the fight against crime.

Speaking at his official installation ceremony over the weekend Quallo promised to represent officers who justifiably are forced to respond to criminals.

Meanwhile Commissioner Quallo has expressed condolences to the family and colleagues of the police officer Dale Thompson.

Detective Sergeant Thompson was shot and wounded by criminals while on duty on January 28th this year.

Over the weekend he died at hospital.

The detective sergeant was shot in the head while he and his team were responding to the murder of a security guard and the shooting and wounding of two others in Fletcher’s Land, Kingston.

Commissioner Quallo also said he will not tolerate abuse of the rights of citizens by police officers, adding that he will work to regain the public’s trust by communicating with ordinary Jamaicans.

And the Minister of National Security is condemning the killing of constable Leighton Hanson, who was assigned to the St. Andrew North Division.