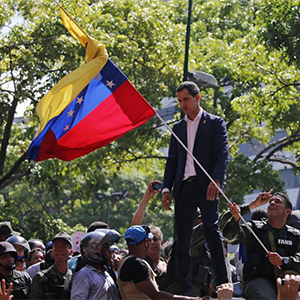 A military uprising in Venezuela.

Interim leader Juan Guaido and the country’s military have taken to the streets to get Nicholas Maduro out.

Speaking with Newscenter 5 this morning Bertha Sunkow of the group Caribbean Refugee Voices made it clear there is no coup.

She says contrary to what some may believe Nicholas Maduro is not the President.

Ms. Sunkow says there are fears of a strong response from the Mr. Maduro’s supporters.

However she noted that the people and the armed forces would flood the streets in devotion to the other side.

She says the final phase of operation ‘Freedom in Venezuela’ began at 5am today.

International news station CNN is reporting gunshots outside the Caracas Air Base where Opposition Leaders Juan Guaido and Leopoldo Lopez have been gathering supporters.

Both figures are still at the air base, where Mr. Guaido had earlier recorded his video address, according to his spokesperson.

CNN’s Stefano Pozzebon is live in Venezuela and says they have decreed amnesty and the release for jailed politicians.