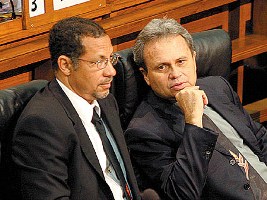 Former government minister Mariano Browne has responded to criticism made against him by Finance Minister Colm Imbert.

On Saturday, Minster Imbert, said Mr Browne had provided misleading information to the public while speaking on I95.5FM on the CL Financial issue.

But in a release last evening, Mr Browne said the Finance Minister had failed to respond to other key points he raised during the interview, which took place on Friday and instead chose to address a small portion of what was said during the programme.

In its statement, the ministry had said that Mr Browne, a former minister in the Finance Ministry had given inaccurate information regarding why the CLF shareholders refused to extend the shareholders’ agreement with the government.