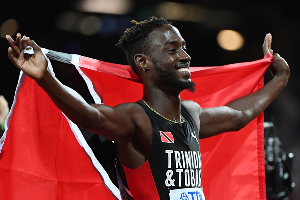 T&T sprinter Jereem  Richards wins gold at the 2018 Commonwealth Games in Gold Coast, Australia, but not without contention.

England’s Zharnel Hughes had to be disqualified for Richards in the final stage of the men’s 200 metres event.

Richards did not get the start he would have wanted, needing to make up some four or five metres coming off the backstretch, as Hughes held a clear advantage ahead of Canada’s Aaron Brown.

However, Richards dug deep and quickly reduced the deficit to draw alongside Hughes, but appeared to check momentarily in mid-stride about five metres from the finish, just as he seemed about to get ahead of his rival.

Both runners crossed the line together and were accredited with the same time of 20.12 seconds. Hughes claimed gold ahead of Richards but was later disqualified.