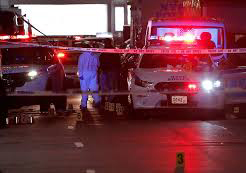 At least 29 people suffered minor injuries in an explosion in a busy part of New York that the city’s mayor said appeared to be intentional, adding there was no evidence of a “terror connection”.

Mayor Bill De Blasio told a news conference there is no specific and credible threat against New York City at this point in time from any terror organisation.

Mayor De Blasio said that, though injuries were significant, none of those hurt was likely to die.

The mayor said it is too early to determine what the incident was caused by.

A police official said on twitter that a second potential device was being investigated.