POS, Trinidad, Monday March 5, 2018 – In an effort to meet its global commitment to help 50 million children live healthier lifestyles by 2030, NESTLÉ Trinidad and Tobago – the Number 1 Nutrition, Health and Wellness Company – and its brand MILO® will continue to support the West Port of Spain District Games, formerly known as the MILO West Games. However, in 2018, the Good Food, Good Life company will now also sponsor the East Port of Spain Games. These two meets will together be known as The Kelvin Nancoo Primary School Games – Powered by NESTLÉ MILO®. The official announcement of its extended scope of sponsorship was made at the official launch last Tuesday (February 27, 2018) at Invader’s Bay, Port of Spain where a TTD$150,000 cheque was presented to Games delegates.

The 2018 West Games will take place on March 6th and the East Games on March 8th, both at the Hasely Crawford Stadium. Participating schools in the West District Games include returning champions Diamond Vale Government, Diego Martin Government, Carenage Girls and Dunross Preparatory and 18 others. The East District Games will feature 19 schools including Morvant Anglican, Lower Morvant Government, St Dominic’s RC and Success RC. This year, with MILO’s extended sponsorship, the 2 meets will see over 8,000 North-East and North-West students partake. “In our 31 years of support, more than 25,000 children have participated in the Games. This expanded sponsorship represents, in part, our contribution to NESTLÉ’s global commitment of helping 50 million kids; but more than a contribution, it is an investment in our future which lies in the hands of our youth,” Geysha Thomas-Davis, Senior Consumer Marketing Manager – Powdered Beverages, NESTLÉ T&T Ltd stated at the Games’ Launch.

For the past 31 years, NESTLÉ has proudly sponsored the West District Games. Athletes and communities alike look forward to this zonal meet, as the rich athletic track & field talent resident in North-West Trinidad is often unearthed. Hasely Crawford, Richard Thompson, Michelle Lee Ahyee, Ato Boldon and a slew of other athletes who have medaled at national, regional and international athletic events are products of what is commonly known as the MILO® Games. Last year, in its 30th anniversary, the organizing committee took the decision to rename the MILO® West Games ‘The Kelvin Nancoo West Games’ to honor and recognize the tremendous contribution of Lead Organizer, Mr Kelvin Nancoo. 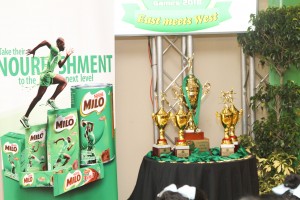 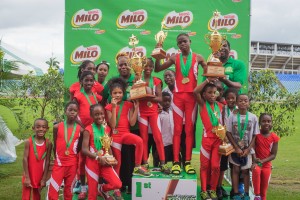 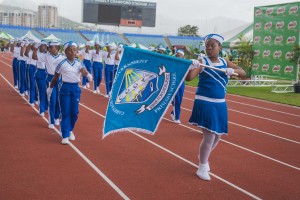 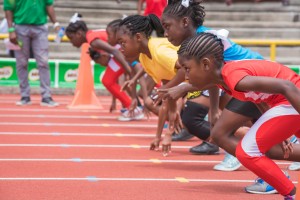