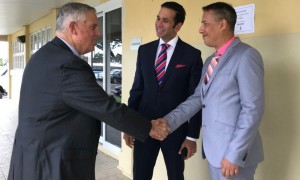 Agreement is reached between Commissioner of Police Gary Griffith and US Ambassador John N. Mondello on the need for a continued partnership in the fight against crime locally.

Ambassador Mondello and a US delegation paid a courtesy call on Commissioner Griffith yesterday.

The meeting took place at the Office of the Commissioner at Police Administration building, in Port of Spain.

A release says Commissioner Griffith shared upcoming plans and initiatives for the way forward for the police service.

It says both parties discussed how they could work together to reduce crime in this country, and agreed on the need for continued US partnership and training.

The delegation was shown a presentation of future initiatives geared toward strategic changes and adjustments in keeping with best international practices, to achieve maximum policing results.

The release says Ambassador Mondello was impressed with the dynamic plans presented and enjoyed the engaging discussion with the Commissioner of Police.

Following the courtesy call, representatives of the US delegation were given a tour of the Commissioner’s command center at the Police Administration Building as well as the CCTV command center in Port of Spain.