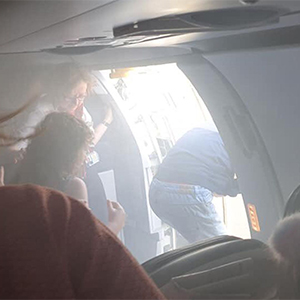 A British Airways flight is evacuated after smoke filled the cabin shortly before landing.

The airline confirmed an “incident” on Flight BA422, which departed London Heathrow at 3:10 pm yesterday and landed in Valencia.

Passengers had to slide down emergency chutes to the runway, with one describing the “terrifying” experience as “like a horror film”.

B.A. has apologised to the 175 passengers on board the aircraft, an Airbus A321.

A statement from the airline said the flight had “experienced a technical issue” as it approached Valencia.

Three passengers were taken to hospital and have since been discharged.