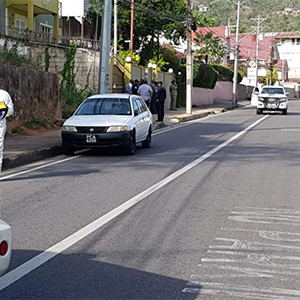 A call for the nation’s schools to be a place of sanctuary for children.

It comes from the Trinidad and Tobago Unified Teachers Association in the wake of a brazen daylight shooting outside a Belmont primary school yesterday.

3 students are now nursing gunshot wounds among them a 6-year-old boy.

Reports say at around 3pm yesterday, just after the dismissal of classes several men armed with guns opened fire on a Toyota Hilux in the vicinity of Belmont Circular Road near the Belmont Government Primary School.

Vice President of TTUTA Kyrla Robertson-Thomas is calling on communities to rise up against these incidents.

2 of the injured aged 6 and 15 were the chil­dren of a man police say is a known gang leader.

An 18-year-old stu­dent was shot in her leg.

Newscenter 5 understands the gunmen followed the intended target, 38-year-old James Gor­don of Mara­cas, as he ran along Belmont Circular Road.