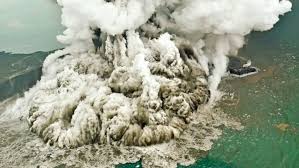 The alert level for Indonesia’s Anak Krakatau Volcano has been raised to the second-highest level possible, after a series of eruptions.

All flights around the volcano have been rerouted and a 5km exclusion zone has also been imposed.

Indonesia’s Disaster Management Agency said the alert level had been raised from level two to three because of the increased volcanic activity.

Last Saturday, the volcano triggered a Tsunami which killed hundreds.

Indonesia’s Disaster Management Agency says the danger zone has been extended from 2km to 5km.

Locals and tourists are prohibited from carrying out activities within a 5km radius.

Air Traffic Control Agency Airnav Indonesia said it was closing flight routes because the volcanic ash Krakatau was spewing meant the situation was on “red alert”.