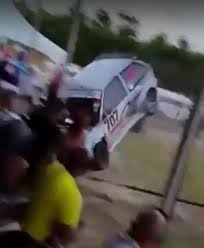 Four people have been injured in an accident at a car-racing event in Wallerfield.

A car is said to have slammed into some spectators yesterday afternoon.

The accident occurred during one of the final races of the Caribbean Motor Racing Championships at the facility.

A video of the accident has been circulated online.

It shows one of the cars slamming into a barrier and stopping a short distance away from the crowd.
Moments after, another car went off the track and became airborne, then dropped into a crowd of spectators.

Reports are that at least one woman was trapped under the car.
Four persons, including the driver, are reported to have suffered serious injury and were taken to hospital.