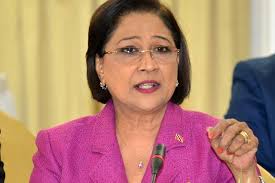 Opposition leader Kamla Persad Bissessar says it is not true to say 13 hundred prisoners will be freed because her side did not support the Anti Gang and Bail Bill 2016.

She is insisting the opposition took the correct and responsible position by not allowing for the extension of the laws, which are to expire next month.

She also assures her bench will not be bullied, intimidated and railroaded by the cheap antics of the Attorney General on such an important issue.

The leader of the opposition wants to know the number of persons denied bail under the laws, which her side is being asked to support.

But Mr. Al Rawi is rejecting the position of Mrs. Persad Bissessar.

He calls it a feeble excuse for her government’s failure to do the work it promised the people.