$2.8 B in sales for the NLCB, but no financial records in 5 years 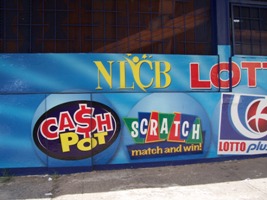 The National Lotteries Control Board’s failure poor handling of its financial records is being questioned, even in the face of record sales in the last fiscal year.

NLCB officials sat before a Joint Select Committee of Parliament yesterday, where it was revealed the company made an historic 2.8 billion dollars in sales between 2016 and 2017.

J.S.C member M.P. Darryl Smith commended the company saying $300 MIL in profit was made despite the economic challenges facing the country.

But it was the company’s failure to submit financial record for the past five years that cause come concern.

Chairman Ian Roach wanted to know why. In response Chief Account Leslie Ann John said the NLCB could not keep a Financial Controller because of the poor compensation package being offered. She said the $18,500.00 was not attractive.