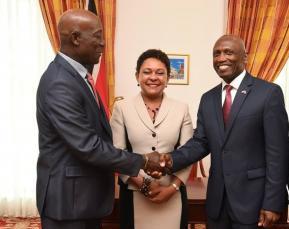 The United States government has heeded a request from this country to extend the deadline date of the passage of the Foreign Accounts Tax Compliance Act.

U.S Ambassador to Trinidad and Tobago John Estrada says it is now recommended that the bill be passed by February next year.

In a statement issued from Washington today, Mr Estrada said the U.S strongly recommends that Trinidad and Tobago passes the fatca legislation no later than February 2017. This would provide a five month breathing space for the country.

Mr Estrada says the extension will allow Trinidad and Tobago to carry out the commitments undertaken when the fatca agreement was signed with the U.S.

He says it is also in line with the implementation plan put forward by this country.

Mr Estrada insists FATCA is just one element of the strong and broader relationship between the U.S and Trinidad and Tobago. He says within the past 6 months, both countries have signed several bilateral agreements to expand their co-operation.

The FATCA legislation stipulates that foreign banks provide information to the IRS on any customer deemed a u.s person if they have over 50 thousand u.s dollars at financial institutions in the U.S  The bill aims to crack down on tax dodgers who attempt to hide millions in u.s bank accounts.

Debate collapsed last Friday, with the ejection of the opposition leader from the house.