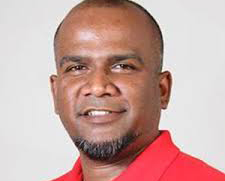 Government Senator Hafeez Ali is reported to have resigned in the midst of a brewing sex tape controversy. The video is being circulated and this is said to have led to the senator’s resignation.

The sexually explicit video clip is now part of a blackmail plot, which is being investigated by the police. It is reported that Senator Ali resigned because he is concerned about the possible backlash for his family.

There has been no official word yet from the People’s National Movement. And the senator is not saying anything. Mr. Ali is a businessman, contractor and a pilot. He was the PNM’s candidate in Barataria/San Juan in the last General Election.

He joined the PNM in 2003. Forty-three year old Senator Ali was the party’s candidate for Barataria San Juan in last September’s General Election.