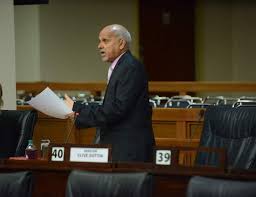 Temporary Independent Senator Pastor Clive Dottin believes there is a relationship between the illicit drug trade and the financing of political parties.

He says until one is addressed the other will thrive.

Pastor Dottin was contributing to debate on the Appropriations Bill 2016 in the Upper House yesterday.

The Independent Senator said there was also a need to look at casinos if drug money were to be traced.

Pastor Dottin said it was time to decide what kind of country Trinidad and Tobago wants to be.