Report: Carnival Bandleader attempted to bring ecstasy pills into the country…was not arrested 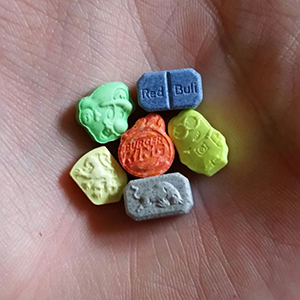 A report that a Carnival Bandleader attempted to bring over 4,000 ecstasy pills into the country.

Deputy Director of the Forensic Science Center Michelle Nasir says the drug, disguised as candy came into Trinidad and Tobago last November, ahead of the carnival season.

A total of forty nine hundred tablets were siezed.

On the Eye on Dependency program on i95.5fm on Sunday, Ms. Nasir did not reveal the name of the bandleader but said she believes the pills would have been offered to masqueraders.

She explained that the bandleader was not arrested because ecstasy was not an illegal drug in 2018.

Meanwhile manager of the Natonal Drug Council Ester Best said there seems to be a push to get a market for the drug in Trinidad and Tobago, especially at parties.

Ms. Best noted this prompted her organisation’s call to have ecstasy placed on the list of dangerous drugs.

She also pointed to vaping and warned that it should not be overlooked.

Ms. Best said her organisation is currently working with the Ministries of Health, Education and Sport and Youth Affairs, to develop a comprehensive program on all drugs.