PM takes Conversations with the Prime Minister to Tobago 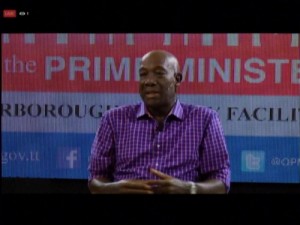 Last night, Dr. Rowley highlighted many projects he said would benefit Tobago, including the Sandals project, developing the agricultural sector, and infrastructural works.

Members of the audience also engaged the Prime Minister on matters of interest including health, building of jetties and marinas, sport tourism, inter-island transportation, land ownership, and internal self-governance.

Dr. Rowley zeroed in on the Sandals Resort project.

The Prime Minister also said the success of Sandals is in the hands of Tobagonians.

He further stated there has been enough talk and his Cabinet is now in action mode.

In addition the Prime Minister suggested that Tobago be offered as a golfing destination.

He said data shows that tourists stay longer when golf is being offered as an attraction.