PM: I never approved any meeting between President and Dillon 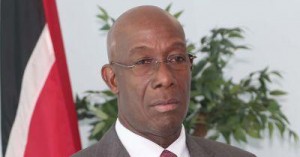 On Wednesday, President Carmona sought to explain and defend his actions related to the Auditor General’s Report, the purchase of wine bearing the presidential crest, and the reason he accepted a $28,000 housing grant until May 2015. He took no questions from the media.

However, it was his defence of his meeting with Mr Dillon, the Commissioner of Police, Chief of Defence Staff and others at President’s House that appears to have outraged the Prime Minister.

Today Dr Rowley said his last meeting with the President was on August 24. He said on the morning of September 5, while in Tobago, he received a call from Mr Dillon who informed him that the President wanted to meet with him.

Dr Rowley told the post cabinet news conference it was the first time he I knew of any intention of the President to speak with the Minister of National Security. Dr Rowley said he was shocked and questioned the minister about it.

But he said Mr Dillon could not say. Dr Rowley said he told his National Security Minister  find out what the meeting was about, as he believed it was a matter related to the President’s family or staff.

However, Dr Rowley said he later found out that the President had chaired a national security meeting, via the media. He said he was alarmed and very concerned, but could not speak with Mr Dillon as he was out of the country.

Dr Rowley said next day he met a 30-point document on the meeting, concerning every area of national security with a covering letter signed by the President.

he said the letter contained a phrase that had him concerned, that President Carmona had the consent of the attendees to tell me what happened at this meeting.

Rowley said since he did not want to rely on his own interpretation, he sought the advice of senior counsel Martin Daly regarding the line of reporting regarding the Ministers and the President.

He said Mr Daly reported back to him that his concerns were well founded and through head of the Public Service transmitted correspondence on his views to the President.

Rowley said that the allegation that he not once but on three occasions approved that meeting with the President and the Minister of National Security was not true.

He also addressed the claim by Carmona that the document he sent to the Prime Minister had been leaked to the press.

Questioned who the public was now expected to believe, Dr Rowley said, that question will be entirely up to the citizen who would have heard from both sides on the issue.