PM and President Maduro sign on the dotted line 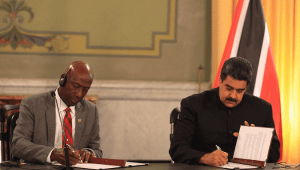 Prime Minister Dr. Keith Rowley and the President of Venezuela have signed on the dotted line, an agreement for the importation of cheap natural gas.

On Saturday, in Caracas Prime Minister Rowley said the agreement may over time also allow for the expansion of the downstream sector and investments there.

The Prime Minister also dismissed concerns that this agreement will hurt relations between Trinidad and Tobago and the United States.

The US has imposed sanctions on Venezuela following contentious elections.

And the Minister of Energy is denying that there was secrecy surrounding the deal with Venezuela.

Minister Franklyn Khan told members of the media yesterday afternoon, the deal is transparent and beneficial to Trinidad and Tobago.

The Minister said the deal is a solid one and was never created to bring doubt.

Prime Minister Rowley along with a delegation arrived in Caracas on Saturday for signing off on the final terms between NGC, PDVSA and Shell.

Dr. Rowley added that interesting discussions were had and this model of cooperation shows tremendous promise for collaboration in other areas.

Prime Minister Rowley added that the agreement may have been long in coming but Trinidad and Tobago will be better for it.

A copy of the terms of agreement is yet to be made public.