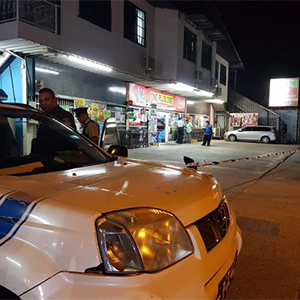 A plain­clothes po­lice officer foils an attempted robbery at a supermarket in Cunupia.

According to a report this morning, at around 8.40 last night, the officer who had just made a purchase at the One Plus One Supermarket on Munroe Road, was about to enter his car, when three men, one armed with a gun and the oth­er two with cut­lass­es, stormed the establishment.

It is said, the of­fi­cer and others were or­dered to lie on the ground.

However he quick­ly hid his firearm un­der the car and as the ban­dits en­tered the grocery, he called for back up.

The bandits who tried to escape fired them upon.

One of them was shot and wounded by officers.

He later sought treatment at the Eric Williams Medical Sciences Complex and is now under police guard.

The other two were also held at the supermarket.

Own­ers of the su­per­mar­ket said ban­dits al­so attempted a robbery there on Monday but were intercepted by officers.

The proprietor was uncertain if the three last night were the same men.