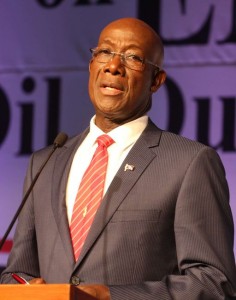 Opposition Leader, Kamla Persad Bissessar says Prime Minister Dr. Keith Rowley has nothing to be proud of, although latest poll gives him a pass.

The poll was commissioned by the Express newspaper and done by solutions by simulation.

It gave the Prime Minister a 50% approval rating.

The Prime Minister says he is pleased but reminds the nation that polls are a snapshot in time.

Last evening at the United National Congress’s Monday night forum at Eco Park in Caroni, Mrs. Persad Bissessar said there is nothing to celebrate.

She said the poll shows that the UNC has to work harder at getting rid of the Rowley government.