Another appearance in court by Marlene Mcdonald on fraud related offences 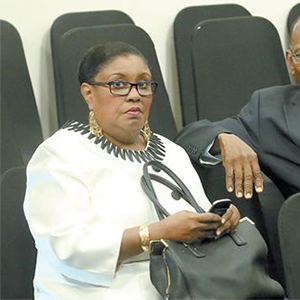 Former Government Minister, Marlene Mcdonald has made another appearance in court, charged with fraud related offences.

Yesterday the State said it intends to call at least 22 witnesses when the preliminary inquiry into the fraud-related charges against the former Public Administration Minister and four other accused gets underway later this year.

They are to return to court on November 4th.

Ms. Mcdonald, who is on 2 million dollars bail and her co-accused, who are also on bail to the tune of 2 million dollars collectively, face a total of 49 charges, ranging from conspiracy to defraud, money laundering and misbehaviour in public office.

The last time Ms. Mcdonald appeared in court, she was in a wheel chair, having been hospitalised during her interrogation.

Yesterday Chief Magistrate Busby Earl-Caddle read out the charges to Ms. Mcdonald, who was not called upon to enter a plea since the charges are laid indictable.
Attorney in the Office of the Director of Public Prosecutions George Busby said he intends to call 22 witnesses when the matter begins.
The court was told that it would take a minimum of 3 months for all the documents to be filed in the case.