Opposition in Venezuela refuses to recognise election calling it a sham 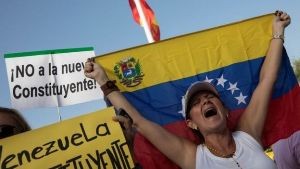 Electoral officials in Venezuela say turnout in the controversial election for a constituent assembly was 41.5%, a figure disputed by the opposition.

The opposition coalition said 88% of voters abstained and it refused to recognise the election. It also called for more protests on Monday.

Sunday’s election was marred by violence, with widespread protests and at least 10 people killed.

President Nicolás Maduro hailed the poll as a “vote for the revolution”.

Venezuelans were asked to choose the more than 500 representatives who will make up a constituent assembly.

The constituent assembly was convened by President Maduro to rewrite the existing constitution, which was drafted and passed in 1999 when his mentor, President Hugo Chávez, was in office.

The head of the National Electoral Council (CNE), Tibisay Lucena, on Monday announced that there had been an “extraordinary turnout” of more than eight million voters.

She also announced that the wife of President Maduro, Cilia Flores, was among those elected as representatives, as well as the president’s close allies Diosdado Cabello, Iris Varela and Delcy Rodríguez.

The announcement was met with outrage and derision by the opposition, who boycotted the vote.

Venezuela’s neighbour, Colombia, as well as Panama, Peru, and Argentina among others have refused to recognise the vote.

Peru on Sunday convened a meeting of Latin American foreign ministers for 8 August to discuss the crisis in Venezuela.

The head of the regional body Organization of American States has repeatedly denounced President Maduro’s government – leading to Venezuela saying it will leave the bloc.