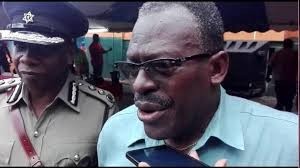 He says this formed part of the talks he had with the Executive of the Prison Officers Association and the Prison and Police Commissioners on Monday.

The meeting was called after the association expressed concerns over the murder of Prison Officer Davindra Boodooram last Friday.

Mr. Boodooram was fatally shot while sitting in his vehicle outside St. Mary’s College in Port of Spain.

In the parliament yesterday Minister Dillion was asked what steps were being implemented to protect the prison officers.

He said legal measures would be adopted to deal with persons who attack members of the protective services.

Senator Gerald Ramdeen also questioned what type of support if any would be afforded the family.

The Minister said it was already being dealt with.

The Minister also assured the officers’ family would receive government compensation if the circumstances merit it.

And independent Senator Paul Richards also questioned the effectiveness of jammers at the prison, in light of the recent murder.

The Minister said while it is an ongoing process there has been some success.

This killing of officer Boodooram came days after reports of an attempted jailbreak, which sources said, led to a search of the Royal Jail.

Video footage later went viral on social media showing prison officers beating and kicking inmates who were tied up and made to lie on the floor.