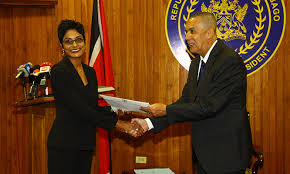 The Police Complaints Authority now has a new Deputy Director…she is attorney at law Michelle Solomon-Baksh.

Mrs. Solomon-Baskh was sworn in at president’s house yesterday.

Following her swearing in, Mrs. Solomon-Baskh vowed to do her best

President Anthony Carmona was high in praise of Mrs. Baskh.

He described her as persistent and thorough.

The PCA director later told reporters there are over 20 investigations underway, which include recent shootings of mentally ill persons by police.

David West said the PCA was not fully constituted since the resignation of former Deputy Director Andrew Stroude on May 8th, but is now able to move forward with its work.