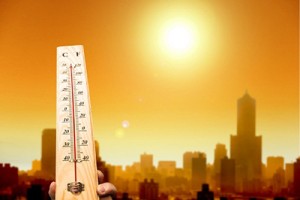 The Trinidad and Tobago Meteorological Service is forecasting potential hot-spell conditions for Trinidad and Tobago for the rest of the week. The MET office expects there to be a 60% or higher chance for maximum temperatures being 33.0 ℃ or higher on at least five consecutive days and the intervening nights to have a minimum temperature above 22.0 ℃.

According to the met office, the potential hot spell conditions are due to the prolonged presence of a high pressure system above trinidad and tobago that has strengthened during the last 48 hours, producing sinking air, which acts like a cap to trap warm air near the ground.

These high temperatures can be hazardous to health, especially for people who may be particularly vulnerable such as older people, persons with long-term or serious illnesses and young children. The hottest time of the day is between 11:00am to 2:00pm.

The MET office is advising persons to keep out of the sun in order to avoid sunburn, wear appropriate clothing, and stay hydrated at all times. It also advises to not leave anyone in a closed/ parked vehicle, especially infants, young children or even animals.

These hot temperatures and dry air, along with already present moderate to strong winds will also combine to create high fire potential in grassy areas of the country during the rest of the week.

Persons are advised to avoid activities that promote open flames; fires and sparks since they have the potential to quickly develop into bushfires. According to the Centers for Disease Control and Prevention, extreme heat is blamed for an average of 688 deaths each year in the U.S.

However the CDC says, when sustained heat waves hit a region, the other health ramifications can be serious, including sunstroke and even major organ damage.