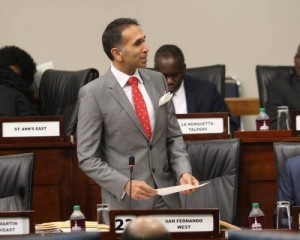 The move to resolve the controversy surrounding the 53 part-heard cases of former chief magistrate Marcia Ayers-Caesar will be made today with the filing of an Interpretation Summons at the High Court.

Attorney General Faris Al-Rawi told the Express yesterday a request will be made to have the matter expedited and he expects the hearing will begin during the court’s vacation period.

He said the state is asking for it to be expedited so the matter can be heard in a quick fashion. Mr Al-Rawi said he is expecting that the process will begin immediately and he also anticipates that it will flow naturally into the opening of the court term.

The AG said this was the best course of action based on the advice received.

Mr Al-Rawi said there is always the general law which is still something separate from these 53. He said in these particular 53 cases the independent advice coming forward is let the court speak to these, it’s the fastest route to deal with it.

However, he said the general position of the improvements to the law is of course an open position still.

The fiasco plaguing the Judiciary erupted with the appointment of Ayers-Caesar as a judge in April when it was revealed she had left 53 part-heard matters behind.