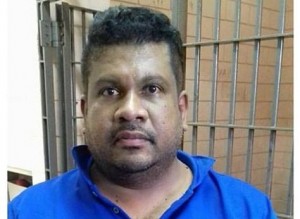 The man accused of sexually assaulting two sisters aged 9 and 14, appears in court.

Reeshie Surujbally went before a Princestown magistrate this afternoon charged with, 2 counts of kidnapping, 2 indecent assault of a minor and 2 counts of inducing a minor with the use of alcohol.

He is expected to reappear in court on may 25th.

39 year old Mr. surujbally was arrested on Tuesday in Barrackpore. Reports say officers on patrol saw a van parked near a canefield in the area and upon checking they discovered a 14 year old girl, naked in the front passenger seat.

Upon further inspection, they found her 9 year old sister naked in the back seat. The girls were intoxicated.

Officers say the man was dressed only in a jersey and his underwear. Police were said to be shocked by what they saw.

They called on Mr. Surujbally to get out of the vehicle but he drove off. He was held by police a short distance away following a chase.