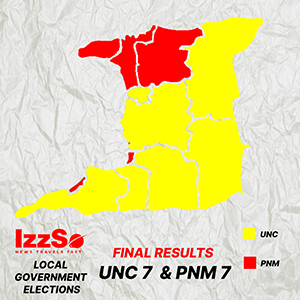 It’s a tie …the United National Congress and the Peoples National Movement secure 7 corporations each in the Local Government Elections.

The preliminary breakdown says the PNM won 74 seats while the UNC won 65.

The ruling party was hoping to have under its control the Siparia and Sangre Grande Regional Corporations, but that was not to be.

The opposition UNC won 5 of the 8 seats in Sangre Grande and while the PNM holds control of the San Fernando City Corporation, there was some slippage.

The majority it now holds in San Fernando slipped from 9 to 6 seats.

The Prime Minister admitted he was disappointed over some of the results.

However, he feels the PNM has done very well given the circumstances.

Mrs. Persad Bissessar said the people are fed up of the PNM.

She said it was the beginning of change.

She also said despite the PNM’s spend on the campaign, the people have spoken.

There are to be some recounts in some districts.

The voter turnout is being put at 30%.