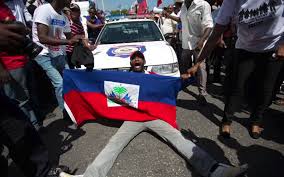 President Josleer Priveer says the elections must happen in order to get rid of concerns about political instability.

The interim President’s comment come as Haiti scrambles to find funding for its third election process in a year.

The results of a presidential vote last year were scrapped after the electoral council accepted a commission’s conclusion that many of the ballots were fraudulent.

This prompted some in the international community to withdraw support for the elections.

A January runoff was also cancelled after violent protests.

Mr. Priveer now assures this will not happen again.

He says there is no plan-b because the risk for the country is too large.

The election will be mostly self-financed as the U.S. government, a major donor to last year’s vote, said it would not contribute this time.

He says the estimated $55 million dollars to pay for the vote will be found, even if other recipients vying for the country’s limited budget lose out to what he called a “priority project.

The interim leader says all has been done to assure that on October 9th , the people go to the polls to elect the legitimate authorities capable of confronting the economic and social challenges that the country faces.