Fire Service called in at POSGH 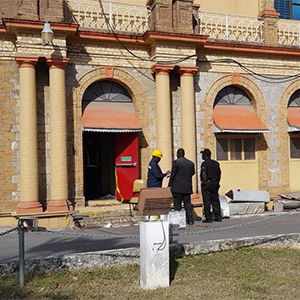 The Fire Service is called in as smoke is seen emanating from the Physiotherapy Department, of the Port of Spain General Hospital.

In a release the North-West Regional Health Authority confirmed the incident as happening at approximately 2:40 pm yesterday.

The release says preliminary reports indicate that the source was within the kitchen area of the department.

It says as a precautionary measure, three patients from the Intensive Care Unit, which is above the Physiotherapy Department, were relocated to another area.

No one was injured as a result of this incident.

The NWRHA says the Physiotherapy Department will remain closed today to facilitate deep cleaning of the area.

It says outpatients with scheduled appointments will be contacted to reschedule.