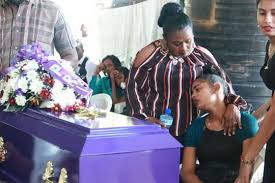 The father of 3-year-old child Prince Francette was not allowed to say his final farewell, after he was blocked from attending the funeral.

Little Prince died when the car he was in exploded, during a visit with his father last Friday.

Prince’s mother, Maria Granger told police she did not wish the boy’s father, Justin Francette, to be at the funeral.

She said he never took care of the child and she continues to have questions about the circumstances surrounding the deadly fire.

At the funeral yesterday Ms. Granger again called for answers.

Having been told he was not welcomed Mr. Francette left the scene of the funeral and said he will hold his own memorial service for his son.

Officiating Bishop Mervyn Rodgerguiers called for an end to the bitterness surrounding the child’s death.

An autopsy revealed death was due to toxic smoke inhalation, but his mother is not buying it and prevented the father from attending the funeral service.