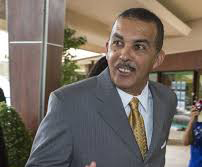 The President held a one hour-long news conference yesterday at the President’s office, St Ann’s. However, he took no questions from members of the media.

He sought to address a number of issues which have plagued his office over the past few days.

President Carmona made an explosive claim that he had advised Prime Minister Dr Keith Rowley of his intention to meet with Minister Dillon, not once but three times.

He said Dr Rowley had given his prior consent and approval.

Dr Rowley is quoted as saying he has no comment on the anything President Carmona has said, except to confirm that he ha sought legal advice on the constitutional arrangements.